KELLY MCCARREN: I got a nose job. Here’s everything you want to know. 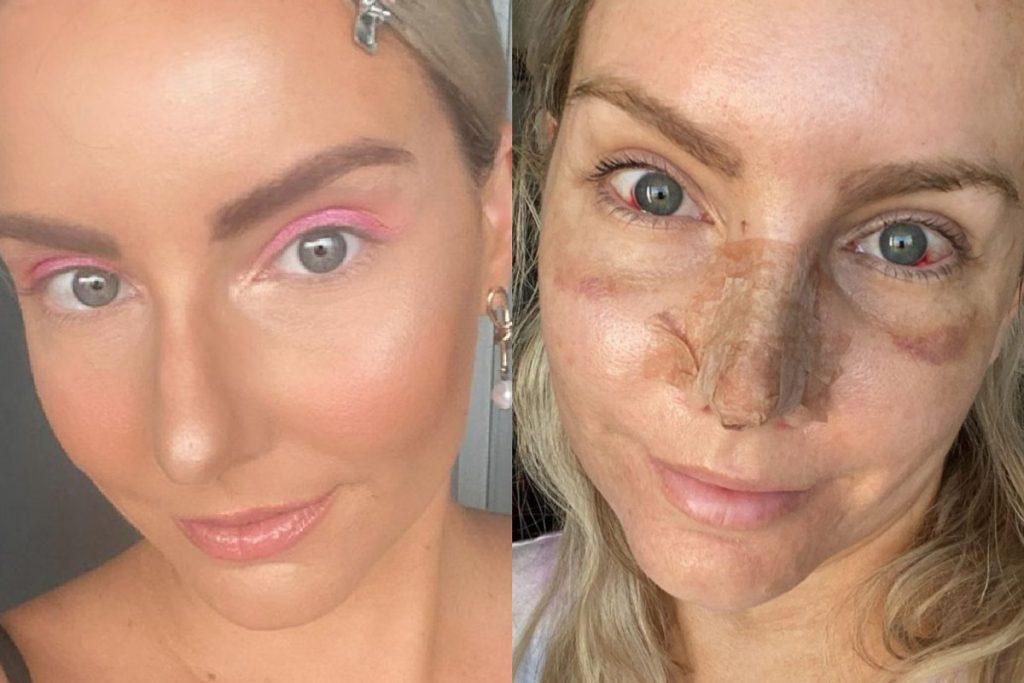 Hello, as you may have guessed by the headline, I recently got a nose job. And I get asked a LOT of questions about it; I knew I would, which is why I documented daily updates on my Instagram.

But there are a few questions that come in thick and fast on the reg, so I thought it clever to devise a little list of my answers to the FAQs of my fancy new designer snout.

Why did I get a nose job?

Because I wanted one. Pretty simple really!

There was nothing WRONG with my nose. Which is why I didn’t tell many people I was getting it done. I knew I’d face a bunch of ‘oh you don’t need one’ judgements that I really couldn’t be arsed dealing with.

I knew I didn’t NEED a new nose. I WANTED a new nose. And I’m a 32-year-old woman who could afford to buy myself one, after wanting it since I was a teenager, so why not!?

How did I feel leading up to the event?

Excited! I had always said I would wait for winter if I’d decided to do it, but as soon as I finished my initial consult, I was like ‘WHEN CAN I GET IT DONE’ because seeing what the surgeon could do with my nose had been exactly what I’d always dreamed about.

How did I feel on the day?

Many a nervous poo was had in the morning; I WAS SO ANXIOUS!

Unfortunately, I had afternoon surgery booked, and if you also have an anxious personality, I’d recommend you request an early morning admission and surgery.

I got to the day hospital at 1pm, and there was a lot of waiting around, which wasn’t great for my anxiety, especially given I was by myself. There were many tears and several panic attacks, but luckily I had a beautiful nurse who placed a bunch of heavy warm blankets on me to calm me down.

I REALLY started to get panicked in the theatre, so they gave me happy gas and then I fought the anesthesia for a while, unreasonably terrified of not waking up.

The last thing I remember is squeezing Dr Zacharia’s hand and asking him to give me a ‘beautiful snout’. I love that even at that moment, my sense of humour was intact.

What did I actually have done?

I had both Rhinoplasty and Septoplasty surgery.

Rhinoplasty is what we refer to as a ‘nose job’ and involved them shaving down the bridge of my nose and reducing the cartilage amount on the tip.

Septoplasty corrects and straightens a deviated septum (which I didn’t know I had and always thought sounded made up).

The nasal septum is the wall between the nostrils that separates the two nasal passages, supporting the nose and directing airflow. I didn’t realise that not being able to breathe through the nose wasn’t normal.

So while I went in for purely aesthetic reasons, Dr Zacharia also fixed up the issues I had internally, helping me long term.

Imagine getting hit by a bus. That’s what nose job recovery was like for me.

I did have the worst case bruising, swelling, and pain – I’ve spoken to a bunch of other people who’ve had the procedure and they didn’t suffer the way I did.

BUT, I think it’s best to be cautious and prepare for the worst. I honestly thought I’d be fine. I planned on WORKING and just carrying on with my normal life!

I wish I’d known just how bad the physical pain would be, because it affected me mentally, given it was such a shock.

Everything hurt, and the pressure was even worse than the pain. It felt like my head would explode, and on about day two or three, I actually called my dad and asked him if my eyes could pop out (I was genuinely serious because that’s what it felt like).

Emotionally, it was rough. I felt so depleted from the pain and after that subsided, horrible anxiety and panic attacks set in.

I was pretty hard on myself, because I didn’t feel like I deserved to complain about pain, physical or mental.

I’d opted into this; I’d PAID for this!? I wish I’d thought of the below, and I’m including it because a lovely lass posted it on a video of mine, and I think it’s beautifully accurate.

“I’m sorry you feel like you need to put a disclaimer on your feelings. I don’t really understand this culture of gaslighting people because there is ‘someone else out there doing it tougher’; by that standard, no one is allowed to express pain or suffering unless you’re the person who’s experienced the most amount of suffering possible. And who’s the judge of that? It makes no sense.”

If you have perspective, you should be allowed to feel whatever it is you’re feeling.

How do I feel now?

I’m almost a month post-op, and I’ve learned that recovery isn’t quick in some ways, but in others, it really is.

When I look at photos of my face even two weeks ago, I can’t believe how much better I look; I’m so in awe of my body for its healing capabilities. 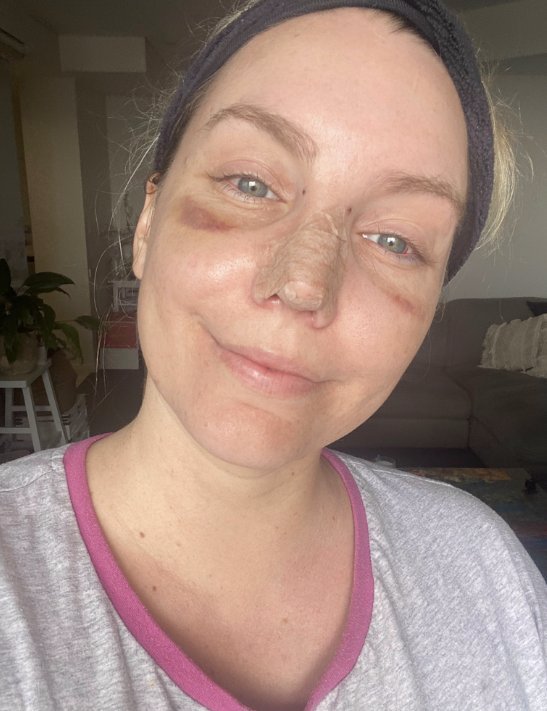 I absolutely love my new nose.

After years of trying desperately to whittle it down with contour and frothing over other people’s petite lil’ noses, I finally have my own. Dr Z really is an artist; he’s made me look like a better version of myself and given me exactly what I wanted – my nose, but cuter.

It’s important to note that the ‘final product’ takes well over a year to really see; the swelling takes a loooonggg time to completely subside, and it’s still pretty intense. But I am noticing improvements every week!

Where did I go?

I put off having this procedure for SO LONG because I knew it would cost a lot. I also was never willing to compromise on a ‘budget procedure’ or surgeon who wasn’t highly regarded for his or her work. It was my face in question, so I wanted the best.

How much did it cost?

Surgery is hard to estimate a cost for, given there are so many factors that affect the cost, things like:

The cost would have been about $17,500 (I got a bit back for the hospital on medicare and had part of my surgery discounted).

Then there’s all the medicine and vitamins (general stuff from the pharmacy; there was a time I was going in daily for things) that added up to a further $500.

So I’d save $20,000 to be on the safe side because for me, even things like extra Ubers cost more as I couldn’t drive for so long!

Would I do it again?

Recovery sucked, but I knew it would be worth it, and when I see my cute new nose in the mirror, I’m so grateful that I finally got off my ass and did something I’d only ever talked about. 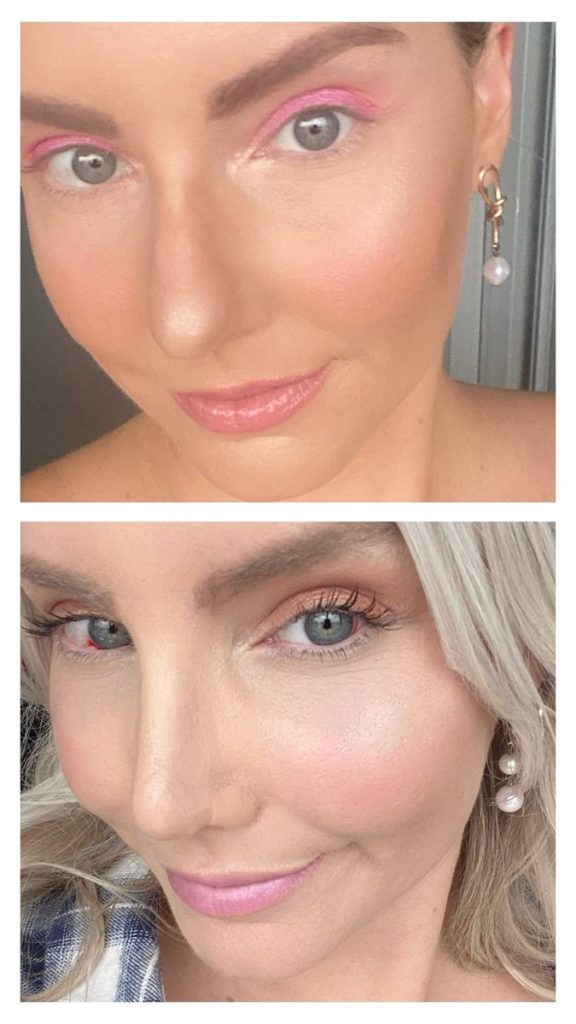 Plastic surgery is irreversible and a HUGE decision, one that I would never suggest someone take lightly. But, we do have these choices in 2021, and I’m so glad I made this one.

Call now to book your consultation.